How Cocaine is Used

The principal routes of cocaine administration are oral, intranasal, intravenous, and inhalation. The slang terms for these routes are, respectively, "chewing," "snorting," "mainlining," "injecting," and "smoking" (including freebase and crack cocaine). Snorting is the process of inhaling cocaine powder through the nostrils, where it is absorbed into the bloodstream through the nasal tissues. Injecting releases the drug directly into the bloodstream, and heightens the intensity of its effects. Smoking involves the inhalation of cocaine vapor or smoke into the lungs, where absorption into the bloodstream is as rapid as by injection. The drug can also be rubbed onto mucous tissues. Some users combine cocaine powder or crack with heroin in a "speedball."

Cocaine use ranges from occasional use to repeated or compulsive use, with a variety of patterns between these extremes. There is no safe way to use cocaine. Any route of administration can lead to absorption of toxic amounts of cocaine, leading to acute cardiovascular or cerebrovascular emergencies that could result in sudden death. Repeated cocaine use by any route of administration can produce addiction and other adverse health consequences. 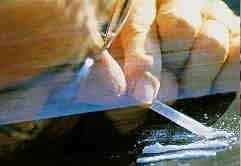 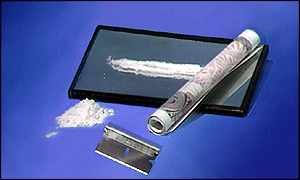