Cocaine in the News


In a sadly ironic twist, director Ted Demme--whose final movie was the Johnny Depp drug saga Blow--had cocaine in his system that may have contributed

to his death from a heart attack last month, the Los Angeles County Coroner has announced.

The affable filmmaker collapsed while playing a charity basketball game January 13 at Crossroads School in Santa Monica. He was rushed to a nearby hospital in full cardiac arrest and was pronounced dead shortly thereafter. He was just 38.

Demme's sudden death stunned Hollywood. The initial autopsy from the coroner's office was inconclusive, but indicated the burly director--a former football lineman who carried well over 200 pounds on his sub-6-foot frame--suffered a heart attack most likely triggered by "natural causes."

On Saturday, the coroner's office reiterated that Demme had clogged arteries, which contributed to his fatal heart attack. However, the coroner also announced that new toxicology tests revealed there was a small amount of cocaine in Demme's blood stream that may have also factored into his death.

Demme's death has been ruled accidental.

The nephew of Oscar-winning Silence of the Lambs director Jonathan Demme, Ted Demme's credits included a memorable string of MTV promos featuring Denis Leary and films like The Ref and Life. He won an Emmy for coproducing the 1999 TV-movie A Lesson Before Dying.

His final and best known directorial project was last year's Blow, which was based on the real-life story of notorious cocaine trafficker and Pablo Escobar lackey George Jung.

Demme had been prepping but never commenced shooting on the sea-based thriller Nautica starring Ewan McGregor and Heath Ledger. He can also be glimpsed in a brief cameo in the upcoming New Line film John Q, which stars Denzel Washington as a desperate father whose limited medical insurance doesn't cover his son's need for a heart transplant. That film opens February 15.

Demme's survivors include his wife, Amanda Scheer-Demme, and their four-year-old daughter and two-month-old son. 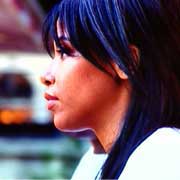 Pilot Of Aaliyah's Plane Had Been Caught With Cocaine, Was Not Authorized To Fly

The pilot of the plane carrying Aaliyah and seven others from the Bahamas to Florida Saturday pleaded no contest to cocaine possession less than two weeks before the fatal crash and was not authorized to fly the craft.

Aaliyah, pilot Luis Morales III and the other seven passengers, who included the singer's security guard and makeup artist as well as representatives from her record label, were killed when the Cessna 402B crashed shortly after taking off from Marsh Harbour International Airport on Abaco Island (see "Aaliyah Killed In Plane Crash").

Morales, 30, was pulled over on August 7 when he drove his car through a stop sign in Pompano Beach, Florida, according to the Broward County Sheriff's records. The police officer searched the car, found pieces of crack cocaine and booked Morales on a felony cocaine-possession charge, as well as charges of driving with a suspended license and running a stop sign, records show. Morales told the arresting officer he was in the area to purchase powder cocaine for a friend, according to the arrest report.

On August 13, Morales entered a no-contest plea to the possession charge, as well as to a November charge of possessing stolen property, records show. He was given three years' probation, and the judge did not enter a decision on the condition that Morales successfully complete the probation, which included mandatory drug tests, according to the Broward County clerk of courts.

Morales' no-contest plea meant that his pilot's license should have been revoked under Federal Aviation Administration rules, according to FAA spokesperson Kathleen Bergen. While Morales' license hadn't been revoked yet, he was not authorized to fly the plane, which was operated by Blackhawk International Airways, according to Bergen.

Blackhawk is cleared to fly charter planes under a "single pilot certificate," meaning that only one pilot was authorized to fly the plane that crashed, Bergen said. Such certificates are common for small air taxi services like Blackhawk, which only has two planes, she said.

While Blackhawk International is on record as the plane's operator, a company named Skystream is listed as the plane's owner, according to a spokesperson for the U.S. Department of Transportation. Both companies list the same Pembroke Pines, Florida, address as their headquarters. Calls to Blackhawk were not returned, and no phone number was available for Skystream.

U.S. and Bahamian authorities are still investigating reports that engine failure and overloading contributed to the crash (see "Aaliyah Plane Crash Investigation: No End In Sight").

Beloit, Wisconsin, May 15 - It was a small amount of drugs, but police say it came from a third grader's pocket. The boy isn't talking to police, and his mom says she has no idea where he got the crack cocaine and marijuana.

However, police aren't ruling out anything. Captain William Tyler says, "We're used to seeing surprising things in this line of work, although sometimes the threshold is unique [in] that we're not expecting to find nine-year-olds in possession of crack cocaine and marijuana."

The boy is home with his mother as the juvenile intake center and child protection services will decide what to do next. But they need more information -- like how the drugs got into the child's hands. Tyler says, "We're looking at the home as the primary possibilty as to where he would have obtained it at."
If police find the boy did get the drugs from home, he could be removed and placed in foster care.

Captain Tyler says the student knew drugs were wrong, and teachers say he ran away when asked to empty his pockets.

But does a nine-year-old know how to use drugs?

"A lot of that's is going to depend on the home environment that they're in. Is it possible for a child to know that? Yes, it is. Is it common for most children? No, it's not."

Tyler says the boy is too young to be put in juvenile detention, so he'll probably be educated on drug use. However, some say it does raise the question whether all kids his age need to learn about drugs. "It could be an isolated incident that needs our attention but it may not require an entire shift of when we do our education efforts," according to Captain Tyler.

Former Baywatch star Yasmine Bleeth was sentenced Wednesday in a Detroit court to two years probation
on a cocaine-possession charge. The sentencing also calls for the actress to undergo regular drug tests, serve 100 hours of community service and pay court costs, said Christopher Coyle, a deputy chief trial attorney for the Wayne County Prosecutor's Office. As part of a plea agreement with the prosecutor's office, Bleeth pleaded guilty in November to possessing less than 25 grams of a controlled substance, cocaine, and to driving while impaired. Another possession charge was dismissed as part of the agreement. Bleeth spent the night in jail in Romulus, near Detroit Metropolitan Airport, after patrol officers found what they suspected was cocaine in her purse during their investigation of a car accident on Sept. 12. Police said charges also stemmed from a subsequent search of Bleeth's hotel room.

NEW YORK (AP) -- A principal known for her good works and tough words about drug abuse has been charged with running a narcotics ring at her elementary school. Delores Hill, 53, was accused at her arraignment yesterday of being the leader of a small drug ring at the Tabernacle Church of God Elementary School in Brooklyn. Ms. Hill allegedly sold $25 bags of cocaine to an undercover policewoman on school grounds. She was arrested along with the school nurse, a janitor and another worker.